Skip to content
COVID-19 Notice: Due to the Public Health Orders issued by Santa Clara and neighboring counties, we regret to inform you that Winsome Speaking is unable to provide live public speaking classes for the remainder of 2020. Happily, Win Heggem is pleased to announce the opening of her online communications program that she has been developing since 2018. To learn more, please go to foundationsofcommunication.com. 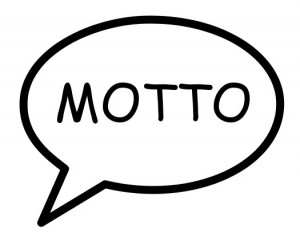 The word “motto” is derived from the Latin muttire, meaning “mutter” and Italian motto, meaning “word” or “utterance.”

The dictionary actually defines it as “a maxim adopted as an expression of the guiding principle of a person, organization, city, etc.”

I highly recommend that you and your club choose a motto to live by this year. When everyone else is muttering and murmuring, have an inspirational maxim ready to roll off your lips. Let it represent the guiding principles and philosophy of your club as you train and compete.

For more than a decade, as a club director I would launch each season with a new motto. I spent time every summer listening for themes and mantras that I heard in the media, read in books, or noticed on ad campaigns. I was on high alert, searching for a catchy slogan that my competitors would be able to adopt as their own.  Our motto would serve as a source of  inspiration during the highs and lows of rigorous competition.

Here were some of our favorites…

“Enjoy the journey (not just the destination)”

“It’s not the triumph, but the struggle”

Interestingly, many clubs, teams and corporations rally around mottos and use them as part of their identity. Even Jessie Pavelka, a fitness expert and one of the new trainers on this year’s Biggest Loser gave this insight in a recent People Magazine interview,

“Every successful team has a strong motto.Finding motivation is a huge issue in itself, so Pavelka and [the other trainer] Widerstrom have taken it under their belt to create a slogan with their teams to stay dedicated. “I tell my team to ‘Take the body and the mind will follow,’ says Pavelka. “I tell them to commit to five minutes – that’s it – and then the mind will catch up with that.”

So what’s your slogan?

When competition feels daunting and the demands of speech and debate seem too taxing, it will be easy for all of us to grumble and complain under our breaths. Instead, why not have words on the tip of our tongues that will unify, encourage, and motivate?

Choose a motto with a message. Then don’t just mutter, but UTTER your mantra and embrace its meaning all year long. Echo it with your coaches, repeat it to your club-mates, and then tell it to yourself as often as you need.